This is one you can’t miss! The most interesting football games of the summer 2020

Are you an avid sports fan and televised matches are an absolute priority every night? Check out the most important sporting events of the upcoming season that you can’t afford to miss!

If we consider the duel between the sporting world and the coronavirus pandemic in terms of a competitive event, then it can be said with a clear conscience that all scheduled games, tournaments and matches have failed miserably. The strict sanitary regime and the underlying concern to limit the spread of the virus, which was taking a deadly toll around the world, meant that a huge number of games around the world were cancelled or rescheduled. As a result, the sports schedule was significantly disrupted. After nearly four months, the situation is slowly returning to normal and more leagues are gradually starting up.

If sports and cheering is your passion, then you are certainly looking forward to the TV broadcasts of the most important sporting events of the upcoming season. Check out what matches will take place in the coming summer months.

No one seems to need much convincing that one of the national sports in our country is soccer. Whether the players win their matches in world competitions or suffer another humiliating defeat, the fans always stick by them. The cancellation of scheduled national and international football tournaments has come as a blow to many passionate football fans. We have prepared an updated schedule of upcoming matches especially for those fans who missed following the football struggles on the glass screen.

Nations League – the best are back in action

UEFA has confirmed when the matches between Poland and Holland and Poland and Bosnia and Herzegovina will take place. The start of the League of Nations has been scheduled for September 3. It is worth saving the date as it will be a meeting of giants. Germany will face Spain. What will be the outcome of this meeting? It is difficult to predict. One thing is certain though – both teams are eager to win.

The matches which will be played by our national team promise to be equally interesting. The players in white and red colors on the football pitch will go out on September 4. The game against the Netherlands is scheduled to begin at quarter to one in the evening. Just three days later the national team will face the representation of Bosnia and Herzegovina. Only a month later the third round of the League of Nations will begin. Admittedly, it’s no longer summer, but the time of autumn, but the calendar of the next meetings presents itself fascinating!

There are going to be EIGHT games in 2020 – we can’t wait for the football excitement! ??? Decision on the participation of fans in home matches of the Polish national team, will depend on the prevailing epidemiological situation and governmental regulations in this regard. #LaczyNasPilka #ReprezentacjaPolski

We can only hope that the pandemic situation will be so stabilized that the League of Nations games scheduled for this autumn will take place without further postponements in the schedule.

Talking about soccer, it’s also worth taking a look at the Polish backyard. The beginning of July is the 34th round of PKO BP Ekstraklasa. The matches promise to be very exciting. The clash of the week will be a match between Lech Poznań and Legia Warszawa. During this game, the Wojseks will have the opportunity to win the title of Polish Champion.

Another electrifying match will be the duel for the second place in the table, for which Piast Gliwice and Śląsk Wrocław are fighting. It is also hot at the other end of the table. If Korona Kielce loses the clash with Arka Gdynia, then they can forget about staying in PKO Ekstraklasa. 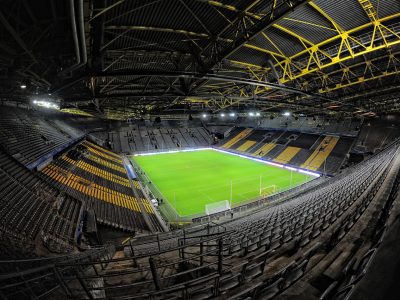 When will fans return to the stadiums of the world’s top clubs?
About Post Author

When will fans return to the stadiums of the world’s top clubs?
//